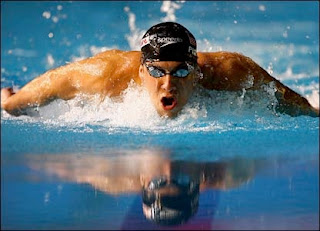 My younger daughter has her last swim meet of the season tonight. I am excited (and still a bit affected by Father’s Day yesterday).

When I talk about Agile & Scrum & Lean, I often refer to the Michael Phelps’ attitude. Not his attitude in South Carolina, whatever you may think of that. (Not that I begrudge him some relaxation.)

I refer to his attitude about swimming. He broke the world record before the Olympics, he broke it in the first heat, again in the second heat and he intends to break it again in the finals. He is relentless.

We ordinary humans must take the same attitude.

Just about now, your colleagues would be encouraged by seeing your team break its own ‘personal best’ record.

So, what do we mean practically?

Well, first, we mean sustainable pace. We mean that we will break records in our new product development work, not by working harder (longer hours), but by working more creatively. By creating knowledge — faster, better, with more certainty and more Business Value.

Second, we will admit that half of what we know is wrong. (Cf Taiichi Ohno in “Workplace Management.”)

Third, we will double the team’s velocity. In 6 months or less.

Note: Improving quality and reducing technical debt are almost always important keys to seriously increased velocity. Not the only keys, but very important.

Who is going to feel better when the team doubles velocity (with sustainable pace)? Yes, the team, perhaps first and most importantly. And customers. And managers. And the widows and orphans who own the company.

Is velocity the only metric in town? Good question: No. But explanation for another day. Increase velocity now, show yourself you can do that professionally and then we talk.

“But, things are so good around here, we can’t possibly double velocity.”

My first thought is that your biggest impediment is that people are hiding from the truth. Every place I look, we are using such a small percentage of the potential of people, that doubling the velocity is a task any team can accomplish. Look again and take the Michael Phelps’ attitude.

If you really think you can’t get any better, declare yourselves the best team in the world, write-up your success and challenge other teams, anywhere, to beat you. You might just learn a thing or two, and have some serious fun.

12 thoughts on “Breaking the world record”