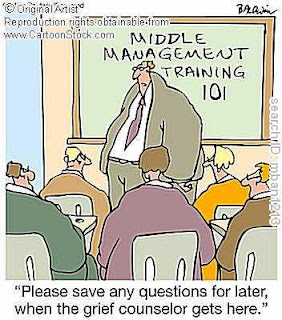 In a lot of organizations I work with, we need to do a better job of explaining Scrum to the middle managers.

Most of the people in the teams get Scrum and see benefits. Most of the senior guys see their metrics get better, and, if they focus on the right feedback, hear and see good things.

But often the middle managers feel left out. Yes, they see benefits here and there, but often not for themselves. They should actually see benefits for themselves, but no one shows them how to recognize and realize those benefits. We just assume they will naturally, without any explanation, understand and adapt to the change (to Scrum).

But, a common feeling among the middle managers is: “Who moved my cheese?” (If you know that book.) Meaning: “Before, I knew how to manage and be successful and show progress. Now, with Scrum, they moved all my levers. How do I function successfully?”

So, we need to take the time to explain it to them.  To be fair, some will figure it out without explanation, but not as many as we want.

Here is a first, too quick, pass at that explanation. It is too simplistic, and too specific in assuming a prior waterfall process, but a good start (I hope).

This is a start on what to explain to the middle managers. Even at the high level, we have left out a lot. The middle managers start to ask: “OK, what do I specifically do?” While some of the specifics will indeed be very specific to your organization, we can say more on that and will in a future post.

P.S. The excellent cartoon is by Mike Baldwin. Google him.

14 thoughts on “Middle Managers and Scrum”