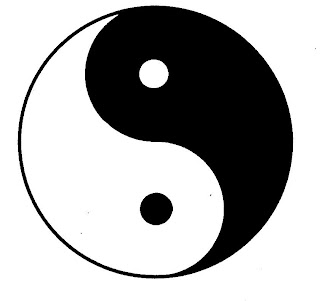 I have been noticing the contradictions in Agile and Scrum lately.

Jeff Sutherland recently did a post about persuasion. The latest post might be summarized as: “To persuade you must be confident and humble.” I guess no contradictions there, but he does talk about contradictions elsewhere.

And this quote has been bouncing inside my head for several weeks, and wants out:

“The test of a first-rate intelligence is the ability to hold two opposed ideas in mind at the same time and still retain the ability to function.” — F. Scott Fitzgerald

We are decisive, and then we delay decisions.

One contradiction that I am talking about a lot now revolves around this saying: “Velocity. Don’t leave home without it.”

We use the known velocity to push back on “magical-thinking” managers who want us to “just do twice as much” in the same amount of time. At the same time, we (the team) use velocity to challenge ourselves to triple our velocity. Like Michael Phelps, we are never satisfied with the record we set yesterday. And by doing many small experiments, we can triple.

I do not need to refer to Hegel’s Dialetics, nor to Taoism to help me understand that contradictions can be useful. There is something in our genes that tells us opposites attract. Only by seeing the “yes, and” will we create something wonderful.

On a slightly different note, please look at Takeuchi’s article in the Harvard Business Review, 06/2008, entitled: “The Contradictions that Drive Toyota’s Success.” (I like the pun in the title.)

So, if you notice some contradictions in Agile or Scrum, maybe they are there for a purpose.