How much should we sharpen the saw?

You probably know the classic story of the man sawing the tree. You walk up to him.

The point is that the man sawing is not thinking well. He could easily have saved time by sharpening the saw.

Sometimes sharpening feels like it is taking time away from doing “real work.” The truth is that sometimes “they” are right about this. How much team time should we allocate to “sharpening the saw?” In Scrum, say.

Coach K, for those who don’t know, is the ScrumMaster of the Duke Blue Devils basketball team — a real team. His team won the NCAA Championship last Spring (in what they call March Madness). His team is #1 in US college basketball today, as I write this, and undefeated. He is a very, very, very good coach. 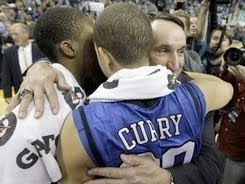 So, if we use him, his team, his assistant coaches, his managers, his trainer, etc., etc., as an example, what is a reasonable allocation to “impediment removal” for one team if you really want to win?

My answer in practical Scrum terms is one full-time person (ScrumMaster) on impediment removal per full-time team of seven people is quite reasonable.

I take the view that none of us has won the NCAA Championship yet (or our equivalent). Until we do, we have plenty of impediments to remove. (By the way, our team members do not join the team with the same raw ability in our sport as Coach K’s recruits have.)

And I notice that Duke did not fire Coach K after they won the NCAA. New England did not fire Coach Belichick after they won the Super Bowl. Repeating at that high level is almost impossible. Again, I personally have never seen a Scrum team that could argue it was the best team, so this worry that we have “topped out” seems like an issue not worth talking about for a long time.

Now, if the SM is not very good or if the organization or some factor means the SM’s efforts will not increase team velocity, then maybe 1 to 7 is too high an allocation. More likely, you should just make the SM better (perhaps by getting a new one).

But it is often the first job of the SM to learn how to remove impediments effectively, and to teach the organization (the managers) how worthwhile that can be. Those are the first two impediments, sometimes.

2 thoughts on “How much should we sharpen the saw?”