There are two main things to say about a ScrumMaster.

With this latter one, we are saying that the SM is not the only one who can remove impediments (the rest of the Team, Managers, people outside the company could all help do that).  But, for the Team, the SM is the main person driving that — making sure it is always happening.  And getting tremendous results.  Or at least keeping the Team winning the Super Bowl every year (you see what I mean).

But for now, let’s turn to servant leadership. 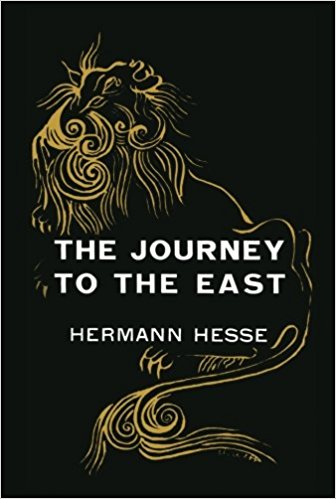 Note: Robert Greenleaf was inspired by Herman Hesse’s novel, Journey to the East. Hence the picture to the right. Thanks to Amazon.

Servant leadership and fixing impediments are almost the same thing.  You, as the servant, ask the Team what their biggest problem or impediment is, and you offer to fix it.  You do what they ask.  In that way, you are their servant.

It seems very simple, does it not?

Here’s a quote from Robert Greenleaf’s original essay that makes it a bit more rich:

“One is asked, then, to accept the human condition, its sufferings and its joys, and to work with its imperfections as the foundation upon which the individual will build wholeness through adventurous creative achievement.”  (Robert Greenleaf in his essay “The Servant as Leader”)

One is bidden to help people, just as they are.

Some of us think that people are mainly broken.  They are weak, they lie, they are lazy, they avoid responsibility.  Many other “bad” qualities.  Certainly, it does not take far to look to see that many if not all of us are … less than perfect.  And could realistically be better.  If….

Others think that all people are wonderful and never make mistakes, and are “practically perfect in every way.”  Or at least 80% good versus only 20% “bad”.  They are much more optimistic about human nature.

In theory, these ideas about human nature are interesting.

What matters more is — who are the people in my Team?

And the evidence I see is that it can vary a lot.

And, I think, Robert Greenleaf, at least for most Teams, wants us to be servant leaders and accept them (the team members) for who they are, “warts and all” as we sometimes say.

Let us take this a bit further.  I think Robert Greenleaf was a realistic guy.  He did not expect you as a leader merely to serve chocolate truffles to those wanting sweets.  He also expects you to help them have a vision of how life can be better. To draw upon the better angels of their natures.

Now – how does this all affect how you act — as a manager or as a SM in the Team?

You may find Robert Greenleaf’s essay to be interesting.  The Servant as Leader

Notice that it is not titled “The Leader as Servant”.