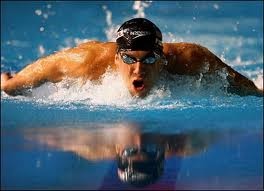 Whatever we do, what is our attitude?  In work or in much of the rest of life, I think our attitude should be some interesting combination of humble and aggressive.

My business is lean-agile-scrum.  Are we ever finished learning Scrum (the simplest of the three)?

Why?  I started talking about the Michael Phelps attitude. Some of you might remember him as the guy who won 8 medals (impossible!) in the 2008 Olympics.  Wikipedia him.

To most of us, in swimming there is nothing simpler than freestyle.  Everyone can do it.  But what is Michael Phelps’ attitude?  ‘I have broken the world record (several times), but I know I can get better!’

If he is still willing to learn (after breaking the world record so publicly and thrillingly), if he is willing to admit he is not perfect yet in that simplest of all swimming events, why can’t we?

There is another thing that athletes know, which is the importance of relaxing and not trying too hard.

Note: Doesn’t he look a bit like a shark up there in the picture?