The Team and the Implementer Role 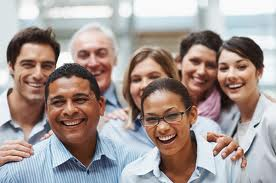 There has been, in several places, some good discussion about the roles in Scrum.  And often the discussion turns (explicitly or implicitly) to ‘what is the Team and what does it mean?’

The full team is what is most important.  Product Owner (PO), ScrumMaster (SM), and Implementers.  Together.  About 7 in total. Ideally 100% dedicated to one set of work (one vision, one product backlog).

They will be motivated, responsible, committed (pigs, from the chicken and pig story), etc.  They will help each other, self-organize, become a strong complex adaptive system, create knowledge together.

If there are problems, it is clear where the problems lie. (Maybe in the Team, maybe outside. But clearer.)  And clearer who or what is affected by the problems (typically, the Team is less effective in building the product because….).

It is this Team, the full team, that wins or loses together.  (Yes, a Scrum team can lose.  This is not a failure of Scrum. And Waterfall would not have been better; just longer, more expensive, more wasteful.)

There is a justified concern, based on experience, that if the PO is part of the Team, he or she will force the Team to commit to more stories in the Sprint than the Team should.

Yes, this has happened. And many other dysfunctions can happen with any set of people, no matter how you configure them. But it should not happen. It is against the rules of Scrum.

First, the PO is typically involved in the process of getting the stories done each sprint.  He provides, or should provide, the business value information and the detailed requirements in a JIT (just-in-time) or flow way during the sprint.  Example: When the implementers ask questions during the sprint (and they always should), the PO should get an answer ASAP. (I also favor the Enabling Spec idea, where a mini-spec for each story is ready JIT before the Sprint Planning Meeting.)

Second, the PO gets one vote amongst 6 or 7.  So, the other implementers should be able to out-vote him if he gets too crazy.

Fourth, I find it is often the implementers themselves who over-commit. And the PO who wants and needs them to be realistic.

So, thinking of the Implementers (only) as the decision makers on the Sprint commitment is typically not that useful.  But, agreed, when we have the dysfunction of the PO trying to get the Implementers to over-commit (I do, rarely, see that), it is wrong.  But that dysfunction can happen in any case, and mere talk about the ‘Dev Team’ as distinct from the full Scrum Team will not help much at all.  I find.

So, include the PO as part of the real team. In terms of real success, it is the whole team that will win or lose.

There is a lot of talk in the Scrum community about the Dev Team, as distinct from the full Scrum Team. (The Dev Team only includes the Implementers, is the idea.)

I find this way of talking, this use of words, generally unhelpful.  It is confusing, especially to beginners. And confusing later.  (We often have to ask: “Did you want me to call the full team or just the Dev team?  And why?”).  And just not very helpful.

Yes, the implementers do things ‘together’ some and talk just amongst themselves some.  And I think we can say it that way.  If I want to say it quickly, I call them “the Doers”.  Just two syllables in ‘doers.’

Should they have an SM or a PO in some of these discussions or involved in this work?  I find it virtually universal for the first two years that the SM and PO are not involved enough.  In part because people just are not used to thinking about them.  It is a paradigm shift.

The Dev Team idea perpetuates the notion, to some degree, that there is still a concept of a ‘technical success’ distinct from a business success.  That is not good.

So, you can see that the phrase “Team Role” or just “Team” (meaning, again, the Team role, as expressed in much Scrum documentation)…. I don’t like either of them.  Again, to me they are more confusing than helpful.

And you can see that I strongly feel that the issue of whether the PO is part of the team is also fully settled: Yes. (This is also discussed in two earlier blog posts.)

Now, what I am talking about above is how we learn and how we teach and talk.  But in the end, the words are not that important.

The real question is always: what did we do?  What did we accomplish?  What shall we do?    The words can help or hurt a bit, but if you are acting in a better way (despite always having some problems with words), then things are pretty good.

2 thoughts on “The Team and the Implementer Role”