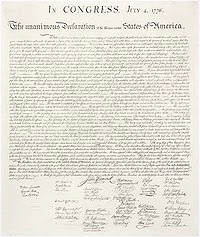 It is July 4th today.  It is a great day to remember Freedom.

As I have said elsewhere, to my way of looking at the world, there is one word, love, that is greater than freedom.  But perhaps only that one.

[Side comment: God is love. So, we could say that God too is greater than freedom. In America, we do not like to mention God in public.  The history of our peoples was to avoid or get away from all the religious wars in Europe, so we have a ‘live and let live’ attitude (in the Bill of Rights, for example). And an ethos of not mentioning God much in public.]

I was born in Virginia, and proud of it.  One of the reasons is that Virginia is the birthplace of Thomas Jefferson, principal author of the Declaration of Independence, a great document for freedom.  There are many great documents for freedom, but perhaps this is the greatest.

We hold these truths to be self-evident, that all men are created equal, that they are endowed by their Creator with certain unalienable Rights, that among these are Life, Liberty and the pursuit of Happiness. That to secure these rights, Governments are instituted among Men, deriving their just powers from the consent of the governed….

Jefferson was, rightly in our view, ashamed of having held the political office of President, and refused to have that office mentioned on his gravestone.  That office is about power, among other things.  But he was rightly proud of being author of these and the other words in the Declaration.

It is perhaps not clear enough, but Scrum too is about freedom.

It may seem odd to some managers to say that they are taking away the freedom of the workers, but it is generally the fact I find.  (Or were, before Scrum.)  So, Scrum is trying to establish a degree of freedom, and with it a corresponding degree of responsibility (always the twin of freedom).

May the blessings of freedom become richer and deeper.

So, especially today, to Freedom!