The ability to create knowledge together 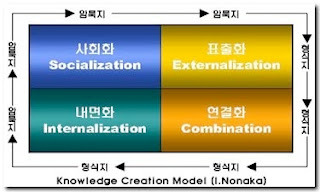 I would like your opinion. I have, for the last few months, been playing with these ideas.

To create a new product, the team is all about knowledge creation. Not management of existing knowledge, but creation of new knowledge.

Note: The picture to the right relates to Nonaka’s ideas about knowledge creation, and tacit and explicit knowledge. Nonaka and Takeuchi are the godfathers of Scrum (per Jeff Sutherland).

My hypothesis is that, if we really believe in this, then who we bring on the team changes fairly substantially.

Let’s remember that the only thing that knowledge workers really do is play with knowledge.  Ultimately, when software guys deliver good code, they have ‘only’ created new knowledge, as shown by the new code.

Now, we don’t do this foolishly. There is explicit and tacit knowledge in several domains that is important — that takes years to develop. It is probably not wise to start a team with six really smart 18-year-olds, but I do think our criteria have been much too skewed toward who has explicit knowledge at the start of the project, rather than which group of people, together, would create the most knowledge, the most innovative knowledge over the course of the project.

There remains still some sort of magic in pulling together a great team.

So, how important is the knowledge creation part to you now?
And how should it affect the team members chosen?

2 thoughts on “The ability to create knowledge together”