“Ozymandias” – Creativity can take some courage

It is hard sometimes to be creative, to create.  We wonder, will our creation ever survive.  I have spoken already of a book called The Courage to Create by Rollo May.

Here is a short poem by Shelley, Ozymandias:

I met a traveller from an antique land
Who said: Two vast and trunkless legs of stone
Stand in the desart. Near them, on the sand,
Half sunk, a shattered visage lies, whose frown,
And wrinkled lip, and sneer of cold command,
Tell that its sculptor well those passions read
Which yet survive, stamped on these lifeless things,
The hand that mocked them and the heart that fed:
And on the pedestal these words appear:
“My name is Ozymandias, king of kings:
Look on my works, ye Mighty, and despair!”
Nothing beside remains. Round the decay
Of that colossal wreck, boundless and bare
The lone and level sands stretch far away.

Ozymandias was a famous king, of surpassing wealth and power in his time. Shelley wrote this after comtemplating the ruins of his kingdom.  You will note that Shelley, the great poet, was not daunted by this vision of despair. 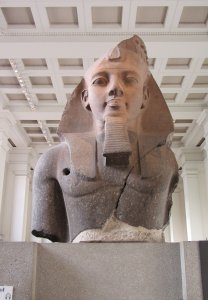 [The picture to the right is of Ramesses II, whose statue may have inspired Shelley.]

I note with irony and pun-ishness, that in our computer world, the lone and level sands stretch far away.  (Ok, Virginia, I am alluding to how sand becomes silicon, as in Silicon Valley. The valley of dreams.)

But if we only build castles of dreams in the breasts of our friends, even those dreams, once built, can die surprisingly quickly.  A new product will come along and charm them a different way.  I am sure all of you can think quickly of an example.

We must have the courage to create, and the laughter to let that beautiful creation come crashing down. And then, to create again.

To close, this quote from Henry Ford:

I cannot discover that anyone knows enough to say definitely what is and what is not possible.

May you innovate, create, and invent with no boundaries, and with great heart and courage.