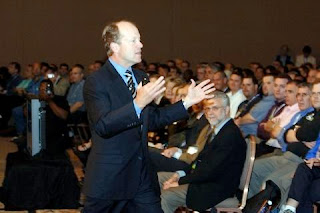 Questioner: How do I sell my executive team on doing this stuff?
Jim Highsmith: Don’t. Just do it. They don’t know what you’re doing anyway.

(This quote is also taken from “Fearless Change” by Rising and Manns. A great book, recommended. See Chapter 6.)

I saw this Highsmith quote as a tagline on a Ron Jeffries’ email. Ron has many wonderful taglines. Watch for them.

Note on the picture: Tom Peters thinks John Chambers is one of our best leaders. I don’t have a strong opinion on that, but I like almost all that Tom Peters says.

So, do we need permission at every step to live our lives? Often, it is better to ask for forgiveness rather than wasting so much time asking repeatedly for permission.

Still, it is usually better if you get the senior guys involved, on-board, on the program, drinking the Kool-Aid, supporting the new idea.

First, “don’t follow leaders, watch your parking meters.” Said a long time ago, but true way before then. Leaders are much over-rated. Napoleon met his Waterloo and his Moscow. Following leaders can get you killed. Leaders are as much followers as anything, if they are smart.

By which I mean, “the big guy at the top” is The Supreme Leader, and yet usually he must do what the majority will find acceptable.

Individual acts of real leadership happen all the time, at all levels and they are still and always important, but expecting the pronunciamentos of any one person to forecast the weather very reliably (or anything else reliably) seems not wise to us. Not that leaders are bad, just that they are, well, human. Have you noticed that lately? In fact, it is in the newspapers daily, probably hourly or less. Power corrupts, and the more the power the faster and more complete the corruption. As Lord Acton taught us, it’s just human nature. We humans wish to fantasize that we are (pick your superlative) than we are. But, ego and corruption are the least of it. The main problem is that one person cannot see and know and think everything.

Still, it is worth some time, at some point, getting “some senior guys” to support Agile, Scrum, Lean or whatever change you wish to make. I think I agree with that.

First, a “leader” is not going to really start to understand Agile/Scrum/Lean until they sees and touch it. Do a pilot so they can. Do not expect to fully convince in the first discussion or at first sight. Expect many conversations and experiences. No one knows which one will be the tipping point, and even retrospectively, no one likely will not be able to say accurately which one was the tipping point. Truth, told with honesty, will win in the end.

My Hapkido master once showed me how the stomach can “defend” against one hard punch, but two lighter punches, delivered almost at the same time, set up a vibration in the gut that is most uncomfortable and usually one becomes incapacitated. Similarly, in football, if you hit someone high with one blocker and low with another coming another direction, almost always, that man will fall.

Perhaps more revealing, any 6-year-old can throw a 300 pound man if they apply learned cleverness (from martial arts), and if they use the energy of their opponent. The same is true in other parts of life, as story after story tells. David can best Goliath.

Umm. Might even apply here. Let it become their idea. Enough said?

Find your lever, Archimedes. You can move the world.