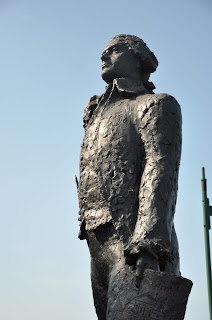 For reasons unknown, I ran into a picture I took of a statue of Jefferson in Paris (it is along the Seine, near the Musee d’Orsay).

Then I saw something else which led me to this quote from Jefferson,  about the meaning of July 4th.  I think it has a broader meaning, so I quote it here:

… May it be to the world, what I believe it will be, (to some parts sooner, to others later, but finally to all,) the Signal of arousing men to burst the chains, under which monkish ignorance and superstition had persuaded them to bind themselves, and to assume the blessings & security of self-government. That form which we have substituted, restores the free right to the unbounded exercise of reason and freedom of opinion. All eyes are opened, or opening, to the rights of man. The general spread of the light of science has already laid open to every view the palpable truth, that the mass of mankind has not been born with saddles on their backs, nor a favored few booted and spurred, ready to ride them legitimately, by the grace of god. These are grounds of hope for others. For ourselves, let the annual return of this day forever refresh our recollections of these rights, and an undiminished devotion to them.

Do we, and for those we  care about, respect the opportunities and responsibilities of freedom?

Adam Smith described how the invisible hand allows the economic participants to enjoy the economic benefits of freedom in, say, a country.  I am still learning how the same basic things happen in a group of 100 people.  Or even a Team of seven.

I must be honest and say that ‘freedom’ (the word) can connote to some people an unwelcome chaos, and can be thought to allow robbers to rob and murderers to murder.  Explaining exactly how the blessings of liberty are indeed always blessings is a difficult task; more than this post shall try to carry.  But, within some reasonable context, the blessings of liberty are always blessings. (And I shall discuss and explain later.)

Let us today try to make some lives better.  It may seem hard, but mostly it will be fun.