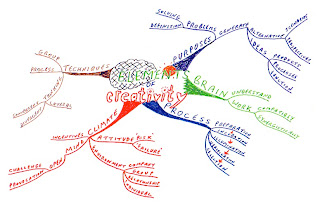 A friend was reading Daniel Pink’s book Drive. And so I started reading it.

I had this series of thoughts.

First, I have for a long time thought that the key thing about our jobs is creativity.  Takeuchi and Nonaka call it knowledge creation, but to me it remains essentially the same thing.  And it covers many domains: business, technical, people, customer, marketing, etc, etc.  We must be, as a team at least, creative in all these different domains. Innovative, inventive, combining things in a new and interesting way, just coming up with something that seems weird at first, seeing something new that is elegant.

I find that there are, in overly simple terms, two types of people I run into.
People who are ok with creativity and chaos, and people who are not.

And Daniel Pink’s book makes me think that they (those in the second group) have not realized how their own internal thoughts and feelings inhibit their creativity. They want to be too orderly, too soon.  They want to edit themselves before they have gotten a useful body of ideas out on the table to play with. They fear that play is not real work.  They worry much too soon about ‘are we on target‘. They fear the subconscious, and want everything to be arrived at logically.

In other words, they have told themselves a bunch of lies about their own motivation (to focus on the subject of Daniel Pink’s book).  They are not inherently less creative, at least according to this hypothesis.  They just have ‘rewarded’ themselves wrongly that less creativity comes out.

Now, it may be that some teams are just less creative. Period.

But before deciding that, let’s give them dance lessons.  Let’s have them play.  Let’s ask them to break their own mental boundaries in some meaningful way.  And see what they can really do once the restrictions come off.

If you run into a team that basically is in the second category, I would work with them to identify their ideas and concerns about creativity.  My hope is that by talking it through, they can start to allow themselves more chaos and creativity.  And also more fun!

In closing, let me repeat here what Jeff Sutherland has often said: If they are not having more fun, then they are not playing Scrum the right way.

I think he means this in two ways;
– only by having fun will their best come out
– fun, serious fun, is a value for human beings in and of itself.  It does not need to be justified in any other way.  And it does not contradict being successful in a business context.

Note: I do not think Jeff would condone ‘trivial wasteful fun’ done for a considerable period.  My example of that might be: eating a whole bowl of candy on Halloween.  That is fun in a certain use of the word, but it is not good for you.  I mean, and I think he means, fun that gives deeper satisfactions than the Halloween candy.

Note: The picture or mindmap above comes from this page:
http://www.sorrythatusernameistaken.com/2010/03/04/creativity/

Our thanks to them.