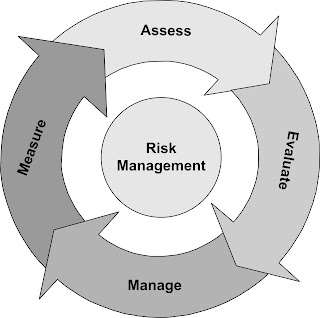 The diagram about risk management is borrowed from techrepublic.com. The point of the picture, for me, is that it is about risk management. I am making no point about whether the ideas embedded in the picture are good or bad. Still, the fear of risk often leads people to take no action (“deer in the headlights”). This is often the worst of several options.

I hear many people complain that it is hard to define Business Value, so they won’t do it. Or, they won’t try any harder to do it.

That it is hard and always changing is true. That fact does not, though, give us sufficient reason not to work hard to get better.

I won’t reiterate here all of the reasons why understanding Business Value really, well, is very, very important. Suffice to say, one can argue that there is nothing more important to understand. (Yes, one still has to actually build the new product.)

One comment I hear is, “I can’t define what risk is worth.” So, today, let’s take risk as an example.

My main reply is, “Well, get an actuary. Those people define the dollar value of risk all the time. It is called an insurance premium.”

Then, the response often is: “There is the business loss from an ‘event,’ and there is the harder to quantity ‘loss of reputation.'”

This is correct, as far as it goes. “Loss of reputation” can often be harder to quantify. But nonetheless, you must take a stab at it. Prove to yourself whether your theory of what it is worth was high or low. Only by taking a stab at it, do you force yourself to learn.

Wide-band delphi. I cannot too strongly recommend this technique. As the Romans said, to predict is difficult, particularly the future. So, we want to get the best ideas possible on the table so that we improve our odds. By improving our odds, we improve the likelihood of overall business success.

So, risk, as one example. Let’s say risk (in several forms) is the main driver of the Business Value of a large effort. Here is one way to estimate it based on assumptions I will not articulate here.

Get Fibonacci cards that go to 987 (across several orders of magnitude). The five “experts” (the best experts you have) go through the Product Backlog, and use the basic Planning Poker technique (we call it ‘Priority Poker’ when it is about Business Value). This time they are estimating the Business Value of each story. (I assume the reader understands basic Planning Poker.)

For each story, the experts question and discuss the underlying assumptions about Business Value. The BV is relative to the largest BV story, which is the reference story (marked with a BV= 1,000). Ideally, we soon have a small set of reference stories. The experts reach a reasonably close consensus (within three Fibonacci numbers of each other), and then average to score each card. By and by they complete all the story cards.

Later, when we have included cost as well, they take an aggressive attitude; they are trying to uncover Pareto’s 80-20 rule within this population of story cards.

Now, to make a lot of business decisions, you want to know the dollar value of the “whole” effort (maybe the first two releases). So, having had a good discussion of the stories, we ask the same experts: “OK, write down in secret what you think this whole pile of cards is worth. In dollars (or your currency). If you need to do a calculation, do it. If you can’t think about it any other way, what is the maximum our business should consider to pay for this stuff? How long for you to estimate this? (Not very long!)  Any questions for the Product Owner, before you start?”

They might ask the Product Owner about some assumptions. “How many people will this affect? What is the average size of an account? How many accounts do we project we will have in three years? What’s the largest fine the Federal Reserve has ever given?” Whatever they think is relevant.

Regarding the time frame, anything more than one hour is too long, almost always.

Each of the five experts writes down his dollar number on a piece of paper, in secret.

Now the fun. You bring all five experts back together, and have them turn over the pieces of paper. They won’t be the same. As with Planning Poker, you have the two extremes talk. Then, they all discuss — usually this means clarifying and revising a few key assumptions. The Product Owner ultimately has to decide which assumptions to go with — like a Scrum — but in some sort of time frame. Typically there is a good “fight.” This is good. Also, typically, they each need to go back and re-estimate. You might do a couple of rounds of this.

You want a reasonable consensus, but not perfect. I will recommend that all voters must be at least within one order of magnitude of each other (the biggest is not more than 10 times the smallest). Ideally a good deal closer than that. When within some reasonable consensus, then average the numbers they give you.

Sometimes it is good to go to the next higher level of management and discuss how the experts arrived at the $6 million BV estimate. And ask them: Do you think this is a reasonable estimate? If not, how would it be improved?

Is the number derived accurate?  Well, first we won’t know for some time (often years), and almost surely it is not precisely correct. Of course not. There is no end to improving our BV estimates. But, it is a decent number with which to make reasonable business decisions, and the cost and speed of the estimate is in reasonable proportion to its value/accuracy.