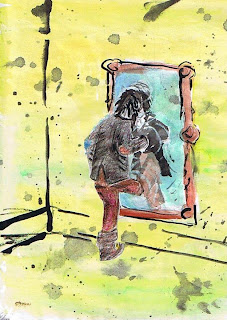 How do we get managers to change? You know, if it were not for them, everything would be just fine. [smile]

We got this question in a class on Friday. (The question did not include the second snarky sentence, at least not explicitly.)

My immediate answer, maybe an intuition, was to quote part of this:

“…the purpose of playing, whose end, both at the first and now, was and is, to hold as ’twere the mirror up to nature: to show virtue her feature, scorn her own image, and the very age and body of the time his form and pressure.”

These are part of Hamlet’s instructions to the players before they perform. “The play’s the thing wherein we’ll catch the conscience of the king.” For the fuller instructions, see here.

So, like the little boy in the old story, it will become clear that the emperor has no clothes, and the foolishness will be clear to all.

We mean: many of the things that we want to change will become obvious. And so they managers will agree to change them.  And, in this way too, the managers themselves start to change.

Put another way: People can and do resist the truth some, but it is hard to do so for a long time. Use the power of the truth.

ScrumMasters, just hold up the mirror. Make it transparent. We will say, in passing, that Scrum is a drama in real life.

But, if you start from the viewpoint that managers are “bad,” you are not likely to influence them. Managers look at things differently than you, and that may make it hard to communicate, but they are still trying to make the project successful — they are still (usually) good people.

Now we come to the “Man in the Mirror,” and some of you may recognize a reference to a Michael Jackson song.

“I’m starting with the man in the mirror
I’m asking him to change his ways.”

Less poetically, “I am starting with myself.”

By your own actions, you can show them — or by the actions of the team. And, despite some things, they will see the benefits of what you propose. Not because you became his or her boss, but because you are right, and you carry the truth. The truth is not yours, but you carry it. And with that illuminating power, the darkness fades away.

And we thought business was all about facts, money, power and share prices. No — it starts with getting people to stop being stupid (which we always are, part of the time), and start seeing a new way of doing things.

For a more common sense way of expressing the same thing, read Taiichi Ohno, for example.

You can change the managers, a little bit each day.

P.S. The early phrase — that the managers are to blame for everything — was said with irony. They are people, just as we are.

2 thoughts on “Hold the mirror”