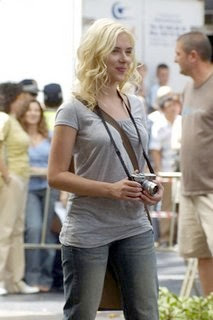 Imagine that you want to make a new camera. And in the first release you will make 1,000 cameras and basically “give them away” — to key influences, etc. So, all of that work makes the customer smile. Imagine that the picture to the right is not of Scarlett Johansson. It’s just a girl, and it represents all 1,000 customers who buy your new camera. You don’t make any profit, just the smile. In fact, you lose $100 on each camera. How do we evaluate the Business Value of that smile? Or those smiles. There are many ways one could approach this problem. Without explaining all my assumptions, let me quickly say this.

Well, presumably the smile is worth something later. You provided customer satisfaction, and they will come back and buy the next camera from you. Or tell their friends to, etc., etc. If you were clever you could estimate that.

But let’s imagine that the Product Owner is not that clever.

Let’s imagine you have five stakeholders; stakeholders who understand the business intuitively and have lots of experience of Business Value in all its aspects. Let’s imagine that you have them vote on the BV.

Earlier I recommended getting the list of stories (e.g., for building this new camera), and having these experts play Priority Poker to assign BV points to each of those story cards. Relative value compared to the largest BV reference card (100) (the card that you all initially think has the most BV) using the Fibonacci series from 0 to 100.

You now do a similar exercise, using expert opinions, but now the real number you need for business decision-making is the total dollar value of the effort (e.g., to judge whether to invest here or elsewhere).

First, let’s have the “doers” do Planning Poker and create knowledge together about the effort. Add Story Points to each card.

Again, there are other techniques, but the one I will recommend first is to have each Delphic expert write down their personal opinion on a piece of paper before being influenced by anyone.

Then flip all the cards (hand-written estimates in dollar amounts) at once, and compare. The two extremes talk most about why each had the highest (or lowest) number — the assumptions and the issues they see with the other extreme. They might compare to previous efforts.

Maybe they vote again and eventually reach some consensus. They discuss again, and vote a third time. Then, however close they get, average the answers they give. Use that. There is no harm if one or more of the “experts” wants to use a mathematical formula of some sort. They should share that formula.

You might, particularly in the first few months of using this technique, have a senior manager do a “sniff test.” They bring him in (or go to him) and say, “Our team, on average, estimated that this effort is worth $17 million, plus or minus about $4 million. Seem reasonable to you?” If he can accept it as probably the best guess at this time, then they did a good-enough job. Or they might take his input, scratch their heads a bit and estimate again.

Finally, as they get closer to production, someone should be working on a formula for BV, and how to prove, or at least get indicators about, whether that formula is relevant. (Chris Matts likes the Business Value Model approach.) Let’s say a key aspect of the formula assumes that 900 of the first 1,000 users have a broad smile. So, they might use the Net Promoter Score to confirm that assumption, etc., etc.

BV is hard. Like any prediction of the future, it is difficult, and likely to be off. Still, we need to learn how to be less and less off in our estimates. While all estimates are “terrible” compared to the precision of what reality will later give us, still it is better to make business decisions with the best info we have today than with no info at all. Even though very imprecise, and sometimes even inaccurate (leading us in the wrong direction). Making no business decisions is not an option. Not using your best guesses of the future seems also wrong.